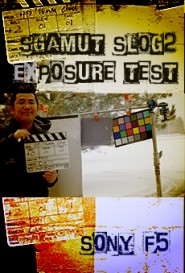 Short video showing the quick exposure tests for Sony’s F5 using Sgamut2 and Slog.   Bottom line, while there was detail in the high end, it was tough to pull out. For my purposes, I’m sticking with the 3.5 stops one way or the other for lighting and exposure.  The white snow in the footage was about 4.5 stops difference from the grey card, however; it went to past at what would have been the 6th and 7th stops over.  Now, while all that might be operator error, for professional work, I would not rely  on the technology without more serious testing.  In my world, I have to deliver at a precision level, so there’s no room to try technology that may or may not work, or that is too difficult to make work.  Anyone who’s shot anything for anyone realizes that the level of expertise from those calling themselves producers, even editors has fallen.  That being said, it would be real easy to shoot something, then, the producer or his or her editor not knowing what to do with it suddenly begins blaming the cinematographer, and so it goes.

After seeing Sgamut-Slog2 showing as grossly overexposed when bringing into PPO, and no way to adjust the settings, it was evident that the technology needed to be tested.   After all is said and done however, I would simply rather shoot film, of which I know what it can bring home and I don’t need a 10 step process to get media that I can use.